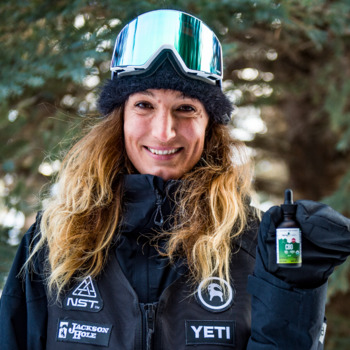 Hana grew up in Big Bear Lake California, where she learned to ski and snowboard at a young age. She made the move to Mammoth Lakes where she began her career in professional snowboarding after attending a Snowboarder Magazine Super Park in the spring of 2001. After a successful decade of competitive snowboarding, which includes World championships Gold, US Open SLopestyle Gold, 3 X-Games Slopestyle silvers, X-Games Real Snow Bronze Medal, and many others she committed herself to backcountry riding and filming projects. She has graced the covers of both Transworld and Snowboarder Magazine, and won Female Rookie of the Year and Female Rider of the Year twice. Now, Hana spends her seasons chasing winter and filming backcountry freestyle parts for movies like INTERVALS, Fullmoon, and Listen to the Eyes. She recently returned to competition this season for the Natural Selection Tour where she placed third in the first stop in Jackson Hole.

I have a birthmark on my left foot shaped like a kiss, or also Lake Tahoe.

I make my bed every day, when I’m home, on the road, in a hotel or whatever.

If I had to eat one meal for the rest of my life it would be this salad I make when I’m home. I just love it and don’t think I’d ever get sick of it.